A Letter to the PWX Network and the WASH Community


10 years ago, Peer Water Exchange was launched at the World Water Forum in Mexico City. Thanks to the team at Sapient whose dedicated effort started in 2005 and brought a two-year dream to reality.

In a decade, much has happened. The image below shows how PWX has linked the water world in a way not seen before, with grassroots implementers connected directly in discussions of projects and funding, in a collaborative atmosphere. The lines show the peer review of proposals; peer review of members also created many connections, those need to be added.

When PWX was launched, it the was the first platform in the water sector with an interactive map and web-based forms and project reports. We followed up with sms reporting, an android app, multi-lingual (Spanish), business analytics, and dashboards. Most of the technology was emulated and improved on by many others, but the core concepts and values: peer review, participatory decision-making, openness, and transparency remain unique (unfortunately).

After 10 years, it is important to take stock and make some critical observations. Buckminster Fuller said: "You never change things by fighting the existing reality. To change something, build a new model that makes the existing model obsolete." The seal of Plato’s ring was engraved with the words: “It is easier to move that which is at rest than to stop that which is moving.” Ray Anderson stated: "The status quo is a very powerful opiate ... it’s very hard to make yourself change." While improvements have happened in the water sector, the tide has not reversed, it is clear that we are not giving the next generation more water abundance than we are enjoying (or struggling with).

We see funds continue to go thru a centralized bureaucratic system, we see little reporting on failures and therefore minimal sharing and learning, we see only token collaboration and support. We still see the search for the magic bullet (filter, if you will) to scale 'vaccine thinking' style. Yes, we made our share of mistakes, especially in marketing the platform; but we are sorry to see Plato proved right and Fuller wrong.

We want to take this occasion to personally thank all those who have played a role in PWX over the past 10 years: a network is as strong as its participants and i am immensely grateful to both those who dived in and to those who just tasted.

Thanks to all those who did play a more inside role, esp. the teams that came into existence (with Mark and Annette in US, with Vinita and the techies in India). And to the current gang (with Deepa, Naveen, Sriram, Surendra, and ...).

Its been a roller-coaster of a journey - 14 years in 'water' - and i have learned and experienced far more than i can digest! Thank you, some of you with far more water expertise have been mentors, some have taught me how little i know about technology, and some have been shoulders of support. Thank you all for co-creating a new and still distinctly unique model. 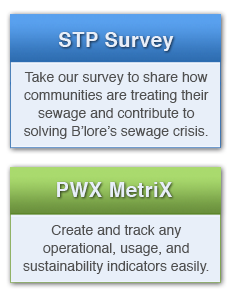